Curt Schilling, a former MLB pitcher and ESPN analyst, recently fired for bigoted comments and tweets, has announced via Facebook that he intends to run for President in four years if Hillary Clinton is elected, and in eight years if Trump wins.

Truth be told, Curt Schilling was once a hero of mine.  I have been a baseball fan all my life, and a Phillies fan for most of it.  Schilling was one of the greats when it comes to the history of Phillies pitching, but once he retired, I became aware of the kind of man he is and I wouldn’t ask for an autograph, much less shake his hand if I were to meet him in person. 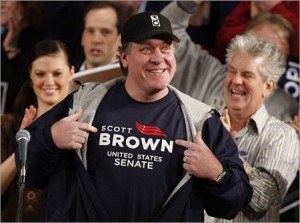 In April of this year, ESPN decided they had enough of Schilling’s nonsense, when he shared a transphobic tweet in response to North Carolina’s anti-trans bathroom and locker room law.  I won’t repost it here, but you can view the NY Times story about it yourself.

This wasn’t the first time Schilling has tweeted from somewhere way out in left field (see what I did there?).  In 2014, he went on an anti-evolution rant, insisting that the fossil record does not prove evolution is true, and that there are no transitional fossils.  Because he’s apparently a scientist.

So in lockstep with the current political climate where the most bombastic, vitriolic and deranged human beings get the most votes, Schilling has decided to enter the arena, either at the state level first and then to the White House, or, “if by some amazing illegal event this country elects another Clinton,” straight to 1600 Pennsylvania Avenue in 2020.

Although I have a feeling this won’t materialize, I also said the same about Trump winning the nomination.  So it looks like we may be in store for another shit show in 4 years.