Last week, Chelsea Clinton appeared on Sirius XM’s “Signal Boost” where the topic of discussion was the Supreme Court’s decision in Roe v Wade. During the conversation, Chelsea had this to say:

“When I think about all of the statistics that are painful, of what women are confronting today in our country and what even more women confronted pre-Roe, and how many women died and how many more women were maimed because of unsafe abortion practices ― we just can’t go back to that. That’s unconscionable to me. And also, and I’m sure that this will unleash another wave of hate in my direction, but as a deeply religious person, it’s also un-Christian to me.”

Uh oh. Chelsea Clinton, seen by many Trump-loving Evangelicals as an extension of her mother and father, who they hate almost as much as Barack Obama, just said that anti-choice movement’s “pro-life” stance is un-Christian. And if you’re viewing Christianity in the sense that love and compassion are at the heart of it, she’s not wrong. Making abortion illegal would open the doors again for unregulated, unsafe health care for women. Making abortion illegal doesn’t prevent abortions. It prevents safe abortions. So making abortion illegal would endanger the health and safety of women seeking abortions, which is antithetical to the Christian foundation of love and compassion for others.

Chelsea was right about another thing. “Another wave of hate” was indeed unleashed, and it was largely from anti-choice Christians who can’t hold back their own pearl-clutching rage long enough to consider she might be right. But then again, I’m not so sure those who have lashed out at Chelsea are of the mindset that love and compassion are at the center of their faith. Sticking to her values though, she didn’t return vitriol with vitriol. She went the route of kindness instead, which I can only imagine fueled the rage of these fake Christians.

Hi Matt – I am a Methodist, thank you for asking. Returning to a pre-#Roe America would be awful for women’s health & rights and for some women, deadly. Knowingly going back to that is anathema to me as an American, a person, a mom & a Christian. Wishing you & yours a good night. https://t.co/sO7ZIBIgYP

Hi Matt- Hope you & your family are having a lovely evening. I am a confirmed Methodist, thank you again for (not) asking. I support a women’s right to determine what is reproductively right for herself & her family, especially on #ConstitutionDay. Blessings to you & your family. https://t.co/wJvhyBOlUR

Hi Joshua – I am a Methodist, thank you for asking. Wishing you and yours a blessed day. https://t.co/vyCO0EsVPI 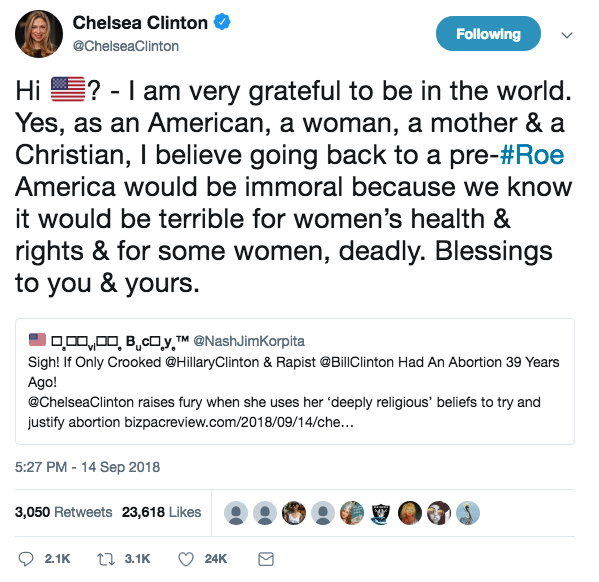 The number of anti-choice @twitter users who wish my mother had aborted me is quite something. https://t.co/1bNbGp6PZ7

That last one is telling. So-called “pro-life” advocates somehow have no problem wishing Bill and Hillary Clinton had an abortion just because they disagree with something their daughter said. This is what right-wing Christianity has become. I don’t say this often, but those people need some Jesus.

Kudos to you, Chelsea, for doing something I would have a very hard time doing — responding with kindness to personal attacks from garbage human beings. It’s a refreshing deviation from what we see in today’s political climate. I hope you can help promote a new age of civil discourse someday.

In Bolivia, If You Smash a Rock, God Will Grant Your Wishes