If you’ve been following my reports about the school in North Carolina who invited the Good News Club to attend an event and give out kool-aid (yeah, I know) while advertising their club, and then covered it up by deleting photos and hiding their Facebook page, I have an update.

Last week, Wittenburg Elementary School, who allowed this Constitutional violation, resurrected their Facebook page about three weeks after taking it down in a panic. After several complaints were posted to the page via the “reviews” section, Wittenburg removed damning photos showing the Good News Club booth at the school’s “field days” and then took the entire page down.  It seems they kept the page hidden until they hoped the issue had blown over.  I did notice the page was back up last week but didn’t add anything; I just kept my eye on it by checking in every other day or so.

Yesterday, a “gentleman” named Clyde Miller, as well as others, found the negative reviews and began responding in defense of the Good News Club. It became evident immediately that those who were responding to the negative reviews had no knowledge of the equal access laws being cited in our complaints and no knowledge of the Good News Club v Milford Schools.  Instead, they just came to admonish atheists, defend the existence of the GNC (which was not being challenged), advocate for the rights of kids to pray in school (also not being challenged), and do so with horrific grammar. After a few hours of going back and forth, and the responses from Christians getting more profane, threatening, and abusive, the school took the page offline again.  I wish I had taken screenshots before that happened. Pure gold.

UPDATE: The Wittenburg page appears to be back online. Here’s the link to my review and the insane comments that followed. Enjoy! (Sorry it’s the mobile link. I’m updating from my phone.)

And all because I filed a complaint about the Good News Club recruiting kids at an official school function. But I’m the “snowflake” right?

After noticing the page was offline, I performed a Facebook search for “Wittenburg Elementary” and came across Clyde Miller’s page as well as his wife’s (Annette Miller).  Both god-fearing good Christian people had made public posts mentioning me, my review of Wittenburg, the articles I’ve written about the school, and my picture & Patheos profile. So I sat back and watched and did not engage.  While a handful of folks commented with their support for the Good News Club as well as their disdain for atheists, the real entertainment came when a couple people commented with their support of removing religion from schools and freedom from religion.

And then, just as snowflakes would, the Millers removed their posts because they “stirred up things.” Regrettably, I didn’t foresee the Millers taking their public posts down, so I didn’t capture the full conversations. I was, however, able to grab some snippets from cached pages. 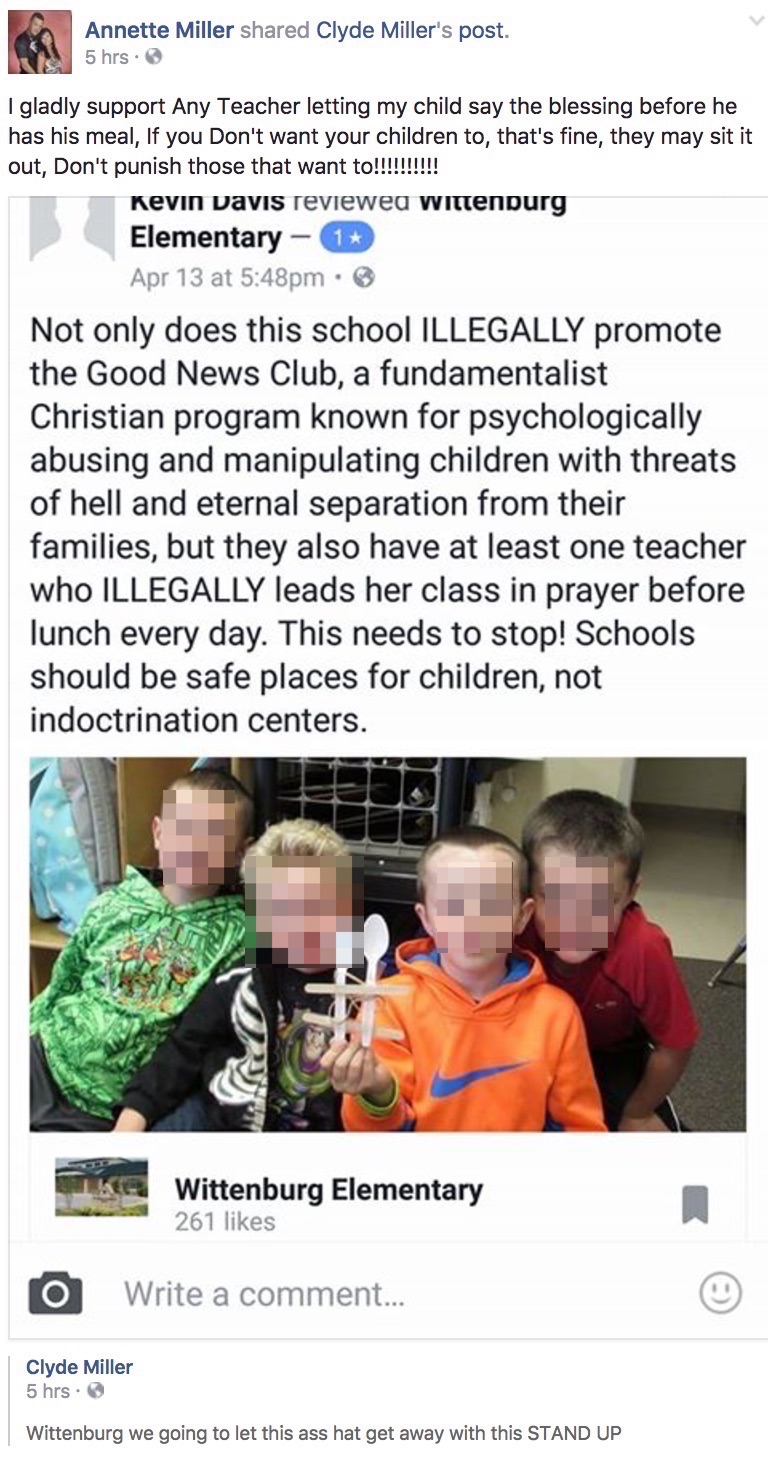 Sorry, no. That’s what people in the legal profession call unconstitutional. A teacher in a public school may not lead his/her class in prayer at any time. Kids are certainly allowed to pray on their own or even in groups. They just can’t be led by a school official. That’s a violation of the Establishment Clause of the First Amendment. I’m sorry the laws of this land inconvenience you. (And by the way, I’m apparently an ass hat.)

NOOOOOOPE.  Back to history class for you!  When you find a mention of Jesus Christ in the US Constitution, would you please take a picture and send it my way? Thanks in advance.

Right about here I grabbed some popcorn. Apparently, if you follow the law and keep religious indoctrination out of public schools, the suicide, drug, and molestation rates go up.  Hmm. Sorry, North Carolinians, but if you have a suicide, drug, and molestation epidemic in your schools, you probably have a bigger issue than not being allowed to pray with your teacher before lunch.  I think April might want to check out the stats on reported sexual abuse in Christian/Catholic schools.

Yup. Them there be what I’m-a fussin’ about. Sorry to disappoint you, Annette, but when I need help, I solve my own problems or lean on family and friends when I need to. A church, or much less prayer, would be the last place I’d ask for assistance.  Too many strings attached there.  It also appears Annette could use some information about the popular and successful secular charities like Foundation Beyond Belief, UNICEF, and even Goodwill. You don’t need to be affiliated with a religion to do good works. Morality and empathy predate religion.

Punctuation. Please. Clyde’s rambling comments on the Wittenburg reviews page were “formatted” like this as well. When I mentioned he might want to use some punctuation of he wants people to understand what he’s trying to say, he responded that he didn’t need any and that I was the one with the issue. Ugh. Hopefully, the school will put their page back up so Mr. Miller’s mastery of the English language will once again be on display.

And there it is. According to Clyde, he never backs down from anyone, but he deleted all of his posts about me because he “started or stired up things.” So I’m confused. Did he delete his posts because people on his friends list got upset or challenged his stance, or does he stand up and fight and never back down? Come on Clyde, your indecision with a touch of irony is making it hard for me to find you credible.

Again, this is just a sample. I’ll keep my fingers crossed that whoever runs the Wittenburg Elementary page grows a spine and puts it back online. When they do, I’ll be sure to alert readers via the SecularVoices Facebook page. Until then, stay classy, North Carolinians!

Thou Shalt Not Display Commandments in Court

Is North Carolina the Most Intolerant State?

Gay and Catholic? No Religious Funeral For You!