Chris Schwartz is running as a Democratic candidate for the Black Hawk County Board of Supervisors in Iowa.  This morning, he walked out of his home to find black spray paint all over his political yard signs and front door.  On the yard sign with his own name on it was the word “FAG” and on his front door was “Lev 20:13” referring to the verse of Leviticus which reads, “If a man also lie with mankind, as he lieth with a woman, both of them have committed an abomination: they shall surely be put to death; their blood shall be upon them.”

Schwartz also had a Clinton sign in his yard which the offender painted “TRUMP” over (although by the looks of it, might be misspelled — big surprise). 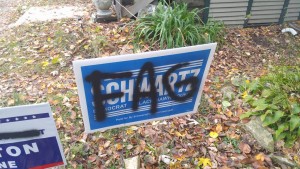 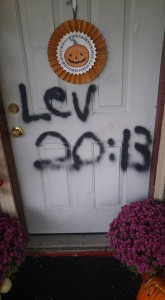 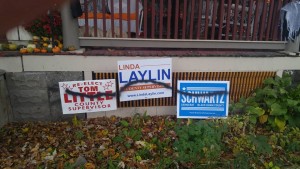 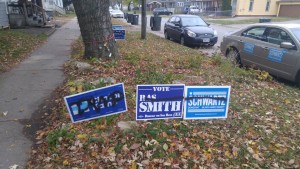 Regardless of someone’s political affiliation, this is never ok.  A peaceful democratic process is what has set the US apart from oppressive dictatorships and monarchies for centuries.  Infringing on that process through hate crimes such as this and other attempts at intimidation, and questioning the impartiality of our free elections by making baseless claims against it as Trump and his supporters have, undermines the democracy we take pride in as Americans.

This is yet another example of what a vitriolic environment we’ve created this election cycle. Let’s hope for the sake of our nation that the mood of this season fades away before we start talking about candidates again, or it will only get worse the next time around.

If Atheists Want to Change Perceptions, They Need to Stop Acting Like This

Missing The Point — Religion is the Problem