Yesterday, Mark Zuckerberg posted about a new Facebook policy to help prevent hoaxes and misinformation from taking over his social media platform.  In it, he detailed what steps Facebook is taking to prevent the rampant sharing of misinformation that has become commonplace, resulting in a very lucrative cash flow for writers and websites who pretty much just make shit up all day.

…Today we’re making it easier to report hoaxes, and if many people report a story, then we’ll send it to third-party fact checking organizations. If the fact checkers agree a story is a hoax, you’ll see a flag on the story saying it has been disputed, and that story may be less likely to show up in News Feed. You’ll still be able to read and share the story, but you’ll now have more information about whether fact checkers believe it’s accurate. No one will be able to make a disputed story into an ad or promote it on our platform.

We’ve also found that if people who read an article are significantly less likely to share it than people who just read the headline, that may be a sign it’s misleading. We’re going to start incorporating this signal into News Feed ranking.

These steps will help make spreading misinformation less profitable for spammers who make money by getting more people to visit their sites. And we’re also going to crack down on spammers who masquerade as well-known news organizations. 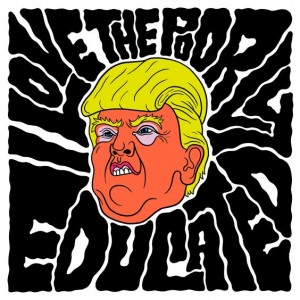 Is it too little too late? For Trump-loathers like me, yeah, a bit.  A policy like this could have been great over the past year, suppressing the popularity of fake news stories written by professional hoaxers like Paul Horner.  Horner could be right when he admits he was one of the people responsible for Donald Trump winning the election last month.

While Facebook is doing what they can to inhibit the virality of hoaxes on their platform, every single user should be doing the same.  If the election of a narcissistic idiot isn’t evidence enough that misinformation is damaging to the future of our nation, then you’re part of the problem.  So before sharing an article on social media, I suggest you do the following:

Remember kids, only YOU can prevent Trumpster fires.

This Is What Happens When You Only Visit Right Wing Sites

The Buzz Behind #NormalizeAtheism: A Conversation with Mark Nebo