Know your enemy.  It’s one of the most popular lessons from The Art of War, and something I subscribe to when it comes to being a secular activist.  That’s why I’m on the mailing list of Ken Ham’s organization, Answers in Genesis.  This week I received an email urging Ham’s stable of devoted creationists to purchase their Halloween preparation kit.  In it, AiG includes a DVD of a sermon all about the origins of Halloween and whether or not Christians should participate in it.  I’m guessing the DVD concludes that followers should participate, but only as an opportunity to evangelize to children, since the “Halloween Learn and Share Kit” also includes tracts (religious handouts) to be distributed to children in place of candy.  Because kids love a healthy dose of Jesus.  Yum.

But that’s not all.  Even worse than AiG encouraging the faithful to hand out tricks in place of treats is what’s on the tract itself.  There are two versions of basically the same message, both of which are printed on faux $1 million bills.  Let me paraphrase… “Hi kids, you’re going to hell. Love, Ken.” 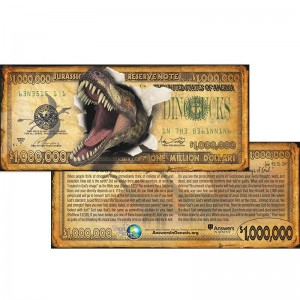 The first version is a bill with a dinosaur on it, because, as AiG says on its description, “Everyone loves dinosaurs.” Well, yeah.  But dinosaurs plus Jesus and threats of eternal damnation? Sign me up!  Here’s a direct quote from the “Dino-buck”:

If you have broken just one of these [Ten] Commandments, God sees you as guilty of sin. The penalty of sin is death and eternity in hell. 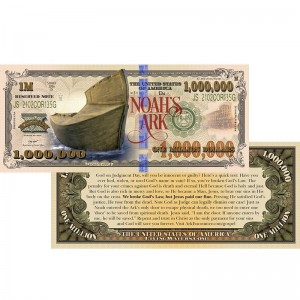 The other version of AiG’s tract is, of course, a bill with Noah’s Ark on it.  Here’s a quote from that one too:

Here’s a quick test: Have you ever lied, stolen, or used God’s name in vain? If so, you’ve broken God’s Law. The penalty for your crimes against God is death and eternal Hell because God is holy and just.

Yeah that sounds like justice to me. One lie and you pay for it with billions of years of unimaginable torture.  For fuck sake.

May the imaginary deity of your choice hold me back if I ever see someone put one of these in my kids’ Halloween bags.  Answers in Genesis is a disgrace to modern civilization.  To those who might be considering handing these out on October 31st, do yourself a favor. Close the door and turn off the lights if you see a little Miles from Tomorrowland approaching your house. Stay safe.

No, an Insurance Company Did Not Offer Assisted Suicide in Place of Chemotherapy

28 thoughts on “Happy Halloween! Answers in Genesis Wants to Scare Your Kids”