The marathon presidential election season that many of us wished would have ended on November 8th rages on in the form of protests, social media arguments, media coverage of every breath politicians make, and most discouraging of all, hate speech, hate crimes, and outward expressions of bigotry and vitriol by pro-Trump advocates as well as anti-Trumpers.

To many, this is not surprising at all.  A nation that was already divided has fractured even further and there seems no end in sight.  There have been reported physical attacks on both sides as well as countless displays of ignorance directed toward the marginalized groups in this country who’ve been pushed to isolation in direct contradiction to the supposed “melting pot” we were all taught our country was while in school.

I think the outward displays of bigotry inside schools are what disgust me the most.  Our children, often too young or uninformed to know any better, are seemingly echoing the bigoted views of their parents by handing out deportation notices, writing racist graffiti and attacking classmates across the country.

So what can we do?

First, we need to start with attacking ignorance with education.  This starts with parents and should continue in schools.  But as stated, sometimes ignorance starts with poor parenting and carries into schools through their kids.  As parents and/or teachers, we can do the best we can with our own kids and hope they make the right decisions when they’re outside our reach.

Beyond that, those of us who want to fight back against hate need to make ourselves available as champions of tolerance, love and safety.  After the Brexit vote, the UK went through something very similar.  They documented a rise in hate crimes, especially against immigrants.  As a result, many residents wore a simple peaceful symbol to show others they were an ally who would help if needed.

A safety pin. And it helped, especially in public areas where a hate-filled person was on the attack, physically or verbally. 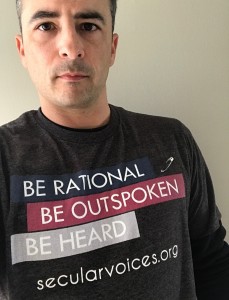 It’s not a glamorous response and won’t turn a lot of heads. But this gesture can help real people get through dangerous situations.  Wearing a safety pin tells potential victims of hate crimes that you’re a safe person to sit next to on the bus or train.  It tells people you will stick up for someone who is a victim of a hate-filled rant or attack by standing between them and their attacker. It tells victims that you will help them get to a safe place or alert the authorities if needed. Wearing a safety pin shows attackers that whoever they’re singling out has allies.  Their attack will not be allowed without a response.

Starting today, I will be wearing a safety pin anytime I leave the house.  Those of us who preach tolerance need to put action behind our words and there is no better time than the present.  Now more than ever, we need to prove that love trumps hate and stand together in solidarity against ignorance and bigotry.  I urge all of the readers at SecularVoices to do the same.  A hate-filled America is not one I want to live in or raise my children in.  Anything we can do to win this battle must be done right now.

Thanks to Keith Lowell Jensen (@keithlowell) for making me aware of the safety pin movement.