As many of our readers are aware, I routinely scan social media sites for references to the Good News Club, in order to ensure that schools are playing by the rules, and that no favoritism is being shown toward this abhorrent religious organization over any other independent afterschool program.  I frequently find small violations such as official school accounts promoting the Good News Club or announcing its activities but not the activities of anyone else.  When I do find mentions of the Good News Club on school pages, I comment with the following boilerplate statement warning parents:

NOTICE TO PARENTS: Be advised that the Good News Club will attempt to scare your kids into pledging their lives to Jesus, by teaching them they’re inherently flawed, have sinful hearts, and are deserving of death and eternal separation from everyone they love. The Good News Club is predatory and psychologically abusive. If you want to teach religion to your kids, do it at home or in your churches. Don’t let these fundamentalists do it for you. If you’re ok with a stranger tearing down your child’s self-esteem, then by all means, sign them up.

Sure, it’s half-sarcasm, half-warning, with a sprinkle of “fuck off” — but it’s fairly effective.  I’d venture a guess that about 70-75% delete the post after I comment on it. The remaining 25-30% of schools will delete this comment, but not go so far as to block me.  In these cases, I repost the comment with the following added:

Deletion of comments warning parents about the dangers of the Good News Club is equivalent to school support of the GNC, thus showing religious preference, and is illegal. Public schools may not endorse or show preference to the Good News Club, as they are an outside agency not affiliated with the school. Giving preferential treatment to the GNC is a violation of the Constitutionally-protected separation of church and state.

After seeing this, most delete the Good News Club post entirely — a victory for the separation of church and state.  But this week, one school in Indiana has been defiant and needs to be called out.

Marrs Elementary School in Mt. Vernon, Indiana posted a Good News Club permission slip (another issue altogether) on their Facebook page with the message, “We are sending these home with students soon. Good news club will start after Spring Break!”  Upon coming across the post, I added my notice to parents.  Within minutes, it was deleted and I was blocked from commenting further.  Of course, I took a screenshot before it was deleted, so my next step was to post the screenshot on my personal Facebook page and the SecularVoices page to encourage others to repost the warning and add the second paragraph. A handful of people did, and they were immediately deleted and blocked as well.

At that point, I sent a request to the Freedom From Religion Foundation to investigate. I have also filed a report with Americans United for Separation of Church and State.

One friend and secular activist, Justin Scott, called the school and spoke to the receptionist there. She informed Justin that the school’s principal, Greg DeWeese, was the administrator of the school’s Facebook page and would be the person with the ability to delete comments.  Justin was not given access to Mr. Deweese but he left his name and phone number. He received no call back.

Last night, presumably after school hours and when Deweese was not sitting at his PC acting as his school’s Facebook police, 8 more people came by and added comments, including links to anti-GNC videos and a news story about a police department who was sued for deleting Facebook comments.

As of 10am ET today, all have been deleted.

CALL TO ACTION:  Replace these comments. Send a message that censoring speech and favoring the GNC will not be tolerated. Better yet, add your comments as a review on their Facebook page. Reviews cannot be deleted as simply as comments. A page owner must appeal the review to Facebook in order to get it deleted.  And as many of us know, dealing with Facebook is a pain in the ass.

We MUST protect children from the abuses of the Good News Club. We will NOT be silenced!  Act now!

UPDATE:  After receiving about a dozen 1-star reviews with comments about illegally supporting a religious after-school program, the school has removed the ability to leave reviews on their Facebook page! Wow, this principal will do anything he can to silence dissenters and promote the Good News Club.  Keep leaving comments on the GNC post here, and let’s keep sending the message that his bias will not be tolerated. 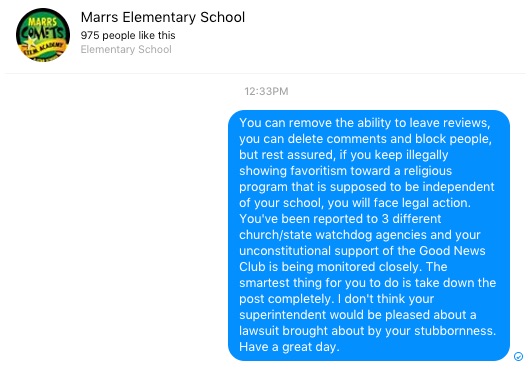 Pennsylvania House Passes Bill Deemed to Be an ‘Exercise in Silliness’

I Hate Richard Spencer Too. But Here Are Three Reasons I Feel the ‘Nazi Punch’ Was Not Acceptable