The Pro-Truth Pledge is an online form where people can promise to be honest in their public communications and fact-check when possible. It’s a project sponsored by Intentional Insights. The president of Intentional Insights, Gleb Tsipursky (who also writes for Patheos), has been making the rounds on podcasts and social media promoting the pledge.  I first heard of this project when he direct messaged me on Facebook asking me to take the pledge. This was the first interaction I ever had with him. What I’ve discovered since then about Tsipursky, and my personal interactions with him, have left me feeling more than uneasy.

Let me start off by reiterating what I’ve said many times in the past — I despise infighting in the secular community, and I do everything I can to avoid it. It’s cancerous and often times petty, considering the much larger battles we’re facing outside our own circles. But occasionally it’s unavoidable. And in this case, I feel it’s necessary to bring some things to light about a pattern of behavior I feel is contradictory to what I’d expect from someone asking others to take a vow of honesty.  If it causes some conflict, fine. But not bringing these things to light after learning them would feel like a lapse in my own integrity. And if I lose that, I might as well shut down SecularVoices altogether.  So here it is…

A few weeks ago, I was chatting with a friend of mine who’s well-known in the secular movement for his work. Organically, the topic of controversy in the secular community came up. We were going through the laundry list of people who have been exposed for deception or wrongdoing, lamenting about how their behavior reflects poorly on the secular community and impedes our progress. In that discussion, my friend brought up a name I heard before but was mostly unfamiliar with — Gleb Tsipursky.  He told me that Tsipursky had been accused of creating “sock puppet” accounts on social media and using them to promote his own work.  A sock puppet is a fake account with a fake identity that someone would use to promote themselves and make it seem like someone else was doing it. Kind of shady, but I can understand the need. Many Facebook group admins don’t like when you post your own articles or projects in their groups. They consider it spamming. Personally, I don’t consider it spamming at all if the topic being posted related to the group it’s being posted in. Who cares who’s posting the information if it’s relevant to readers? Self-promotion is a bitch, and most of us are forced to do it on our own. So yeah, some content creators have taken more “creative” approaches than others. But anyway, sock puppets aren’t the issue I want to discuss.

A week later, I received a direct message on Facebook from Tsipursky asking me to take the pledge and support his effort. Turns out we were Facebook friends… who knew?  Anyway, I didn’t respond — not because I had anything against the guy or refused to sign his Pro-Truth Pledge, I was just busy when he messaged me and neglected the message.

About a month after that (yesterday), another friend, Natalie Newell, who hosts The Science Enthusiasts podcast with Dan Broadbent, posted this:

One of the comments caught my eye:

Now it’s ringing a bell. This is the guy I was hearing about from my friend a month earlier. And then I saw that Tsipursky responded:

I thought that was a really strange and overly-defensive reaction. And Jeff was asking a question. That’s not slander. “I do not intend to engage with questions on this matter.” So was he trying to control what questions Natalie and Dan were going to ask him on their podcast? Tsipursky basically said he’s not going to address questions about behavior that might be antithetical to his Pro-Truth pledge, but instead dumped a link to an article where he claims to have addressed the matter. So I read it. And to summarize, Tsipursky says there’s no way he could have created and managed sock puppet accounts because he’s way too busy being a popular public figure. I’m not sure if he actually thought that would fly in a community full of critical thinkers and skeptics. So I responded. And then this happened. 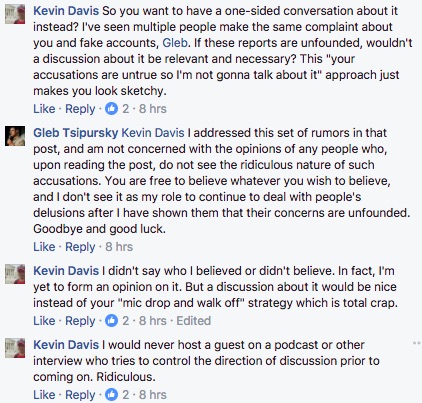 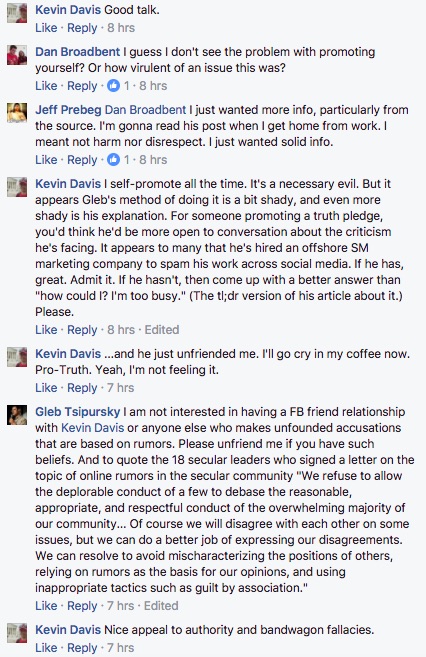 I didn’t like Tsipursky’s reaction to questions about his marketing/promotion tactics. It all seemed very fishy to me. While this was going on, I started receiving direct messages from other prominent atheists expressing their support, thanking me for confronting Tsipursky and asking him these questions. One of them sent me this and my brain nearly exploded:  Concerns with Intentional Insights

Last year, Jeff Kaufman posted an extremely detailed and well-organized explanation of issues found with Tsipursky’s organization Intentional Insights, as well as concerns with claims made by Tsipursky himself. I won’t rehash it all here, but here are the most concerning elements I read. The links will take you to the section of the article where each is examined:

There’s a lot more, and it’s overwhelming to say the least. If nothing else, it does appear that Tsipursky hired people in third-world countries to like, share, and promote his work. Like I said before, self-promotion is tough. We all have to do it if we want our projects to succeed. But if you did something kinda shady, own it. Don’t deny it over and over again, and then accuse people of slander just for asking you about it. And certainly don’t go out promoting a Pro-Truth Pledge when you obviously have an honesty problem to begin with.

Back to the Facebook thread. After reading through some of this, my dander was up and I decided to be more straightforward with Tsipursky. People make mistakes. I certainly do. I wanted to afford him the chance to say, “yes, I hired people to promote me and was dishonest about it in the past.” I thought, maybe this truth pledge was his way of repenting for his prior dishonesty and he’s turning over a new leaf. So I re-engaged. I decided I’d give him a chance to be honest. If he was, I’d drop it, because again, I understand self-promotion woes. If he wasn’t, I decided this article was going to happen. It didn’t go well: 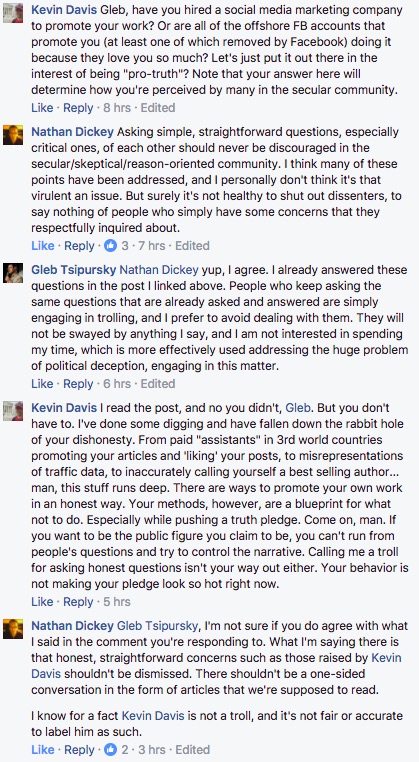 That’s Nathan Dickey of the Trolling with Logic podcast backing me up. His input and support was appreciated.

Here’s what should be noticed — Tsipursky has a knack for dismissing inquiries or criticism and attempting to make the accuser sound like the guilty party. Notice how he refused to answer my question but instead accused me of being a troll, an attempt to vilify me rather than address my concerns. If Kellyanne Conway ever resigns, this guy’s got a future in politics.

And then Tsipursky doubles down and accuses me of ad hominem attacks: 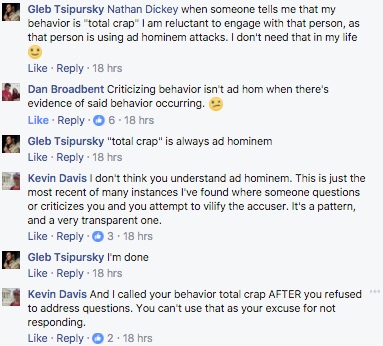 The conversation ended abruptly with this. Gleb Tsipursky was uninvited to The Science Enthusiasts podcast. 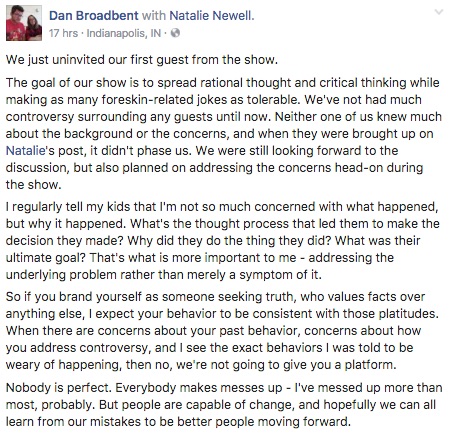 Well said. Tsipursky had every opportunity to just come clean and admit that despite the fact he was pushing a truth pledge, he was being dishonest about his self-promotion activity, or had in the past.

Part of the Pro-Truth Pledge states this:

So I ask again, is the ‘Pro-Truth Pledge’ creator ignoring his own advice?

And why does a website that’s in essence just an online form have a donate page? What do the donations get used for? Surely, expenses are at a minimum — web hosting, domain registration… and possibly a team of dedicated superfans (or paid assistants in third world countries). Maybe I’m just getting punchy about all of this.

There’s much more to this story, and I’ve been privy to information and private conversations involving Tsipursky that I’m not at liberty to disclose, but I can tell you this… all of these private conversations support the conclusions of Tsipursky’s lack of honesty, vilifying accusers, and reluctance to admit any wrongdoing. That’s not pro-truth. That’s self-preservation under the guise of claiming innocence.

In the end, I’ll just say this. I have no problem with self-promotion. I do it all the time. It’s likely I’ll post this very article in multiple Facebook groups. What I have a problem with is hypocrisy, especially within the secular community. As atheists and activists, we shine a light on religious hypocrites all the time. In order to set ourselves apart from them, we must be better than them, and be consistent.  And when we see someone who’s active in our movement not playing by the rules, we need to police our own and call them out.  This is how we rise above the accusations that atheists are immoral. This is how we prove them wrong.

It’s likely Tsipursky will see this post, and he may or may not respond to it. If history is any predictor, he will respond with a rather verbose dissertation about how innocent he is, how he’s been attacked, victimized, and damaged by this, and what a horrible person I am to bring this “slander” upon him. That’s fine. It would be nice if he’d just tell the truth instead.

MAGA Mail Bomber Just the Tip of the Conspiracy Iceberg

20 thoughts on “Is the ‘Pro-Truth Pledge’ Creator Ignoring His Own Advice? You Decide.”