A week ago Sunday in Pensacola, Florida, Chris Johnson presented his documentary, A Better Life, to Humanists of West Florida for his 100th screening and film discussion, about two years after debuting the film in London on May 2, 2015. The documentary is part of a larger project, composed of a “trinity” if you will, which started as a photography book, then documentary, and now a podcast. 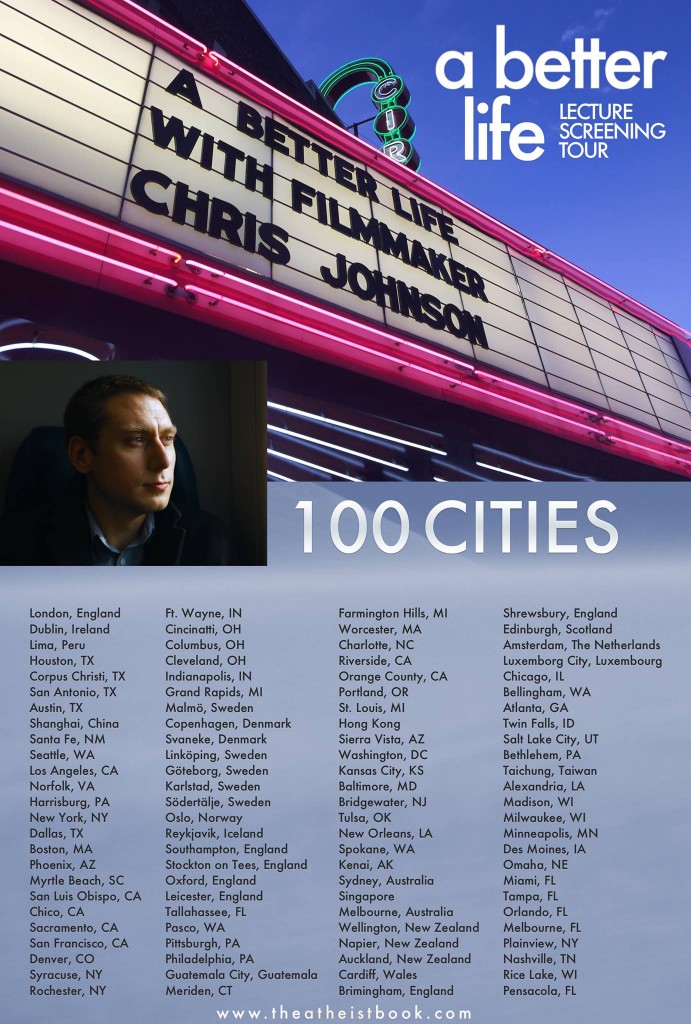 Last week, Chris gave his 101st presentation at the Center for Inquiry headquarters in Amherst, NY, where I caught up with him in person and we sat down for a chat.

KD:  You’ve got to be exhausted. Do you ever think about ending the tour and moving onto the next project?

CJ:  It is exhausting, but it’s so rewarding at the same time. I love what I do. It does have its downside… traveling is exhausting, not knowing what your schedule is going to be, but I  love traveling and meeting secular people from all over the world. And people that, despite having different cultural or religious backgrounds, have the same worldview as me, and want the same world as I do. We really are a global community. People feel very isolated as atheists sometimes, but we do have global support and just need to know where to reach out.

KD:  So, 100 cities (now 101) in a little over two years.  That’s a lot of traveling and a lot of time away from your home in New York City. Do you even still have a permanent residence somewhere?

CJ [chuckles because I’m hilarious]:  I do. I have a room back in NY. I have two roommates who think I’m the best roommate because I’m never there!  But seriously, it’s nice to have a place somewhere so you feel grounded. Because that’s one thing that’s hard when you’re on the road all the time. You don’t feel like you belong anywhere. You’re just traveling from one place to the next, and it really does weigh on you a bit. So it’s nice to have that place to go back to.

KD:  Is this experience what you thought it would be when you started it two years ago?

CJ:  It’s much longer than I thought it would be. I thought I’d do like 6 cities and be done with it, because, who would do this for two years? But it just took off and became such a big thing that it had to be my full-time job. I couldn’t do anything else at the time because I was so busy with this.

KD:  Which of your subjects surprised you the most based on your impression of them before the shoot and then what you found after meeting them?

CJ:  Alex Honnold has been in the news recently because of his climb up El Capitan in Yosemite National Park. And there was an article in the Times recently about him that really resonated with me. It said something like, “for those who know Alex personally, they know he’s not just this crazy rock climber. He’s incredibly articulate and well-read, and kind, and generous, and funny, and just an incredible human being on top of being this amazing athlete.” And I thought “of course” because I know him and that’s exactly what he’s like, he’s incredible, but in ways in addition to being the athleticism.  I don’t know if that was a big surprise to me, but it’s one of those things where he’s just an incredible person and I love our conversations.

KD:  So what would you say you’ve learned from this experience?

CJ:  There’s a piece in the film I always talk to people about where A.C. Grayling says, “If you live until you’re 80, that’s less than 1000 months in your life.  For 300 of them, you’re asleep, and for 300 of them, you’re waiting in line somewhere. So you’ve got 300 months to do whatever it is you want to do.  And that really stuck with me. How do I want to spend this limited amount of time? You have to weigh the pros and cons. Could I make more money at a desk job in NY? Sure. Would I be happy doing that? Probably not as much. So do I have to make sacrifices? Sure. But are they worth it? Absolutely, because I really do love what I do. The funniest comment someone ever made to me at a screening was, “I could tell you’re not making a lot of money doing this, because I noticed you’re wearing the same shoes here as you did in the movie.” It’s true, but I wouldn’t give it up for anything. I love the travel aspect of it even though it’s hectic, because I love seeing different places, experiencing different cultures, meeting new people, and getting to know secular communities around the world that I would never know about before doing a project like this. Most of the time as an artist, you put something out and you never interact with anyone who’s experiencing it. But for me, I get to go around and engage with people right after they’re seeing my work.

KD: Assuming at some point everyone will have heard of this film and seen it, what’s next for you? Do you think you’re more likely to have your next project be atheism-related or photography-related or both, or neither?

CJ:  I definitely would like to stick to something in the secular/atheist/humanist world. I’ve spent the past 5 years working on the book, film, and tour and everything, and I’ve built relationships with people and communities, and there’s more work to be done. I’d love to say I’ve made the “film to end all films” in the secular community, but we know that’s not the case. I’m not sure what I’ll do, but whatever it is, I want to do it for the right reasons. I want there to be a need for it.

KD:  OK here’s the semi-controversial question of the interview. Since the book was published, one of your subjects, Teresa McBain very publicly left atheism and returned to religion. In your mind, does that tarnish the book in any way or do you regret having her in it?

CJ:  It’s something that I never expected. I had a great time talking with her and getting to know her. So when I found out she became a Christian again it was a bit of a shock. But at the same time, there were a lot of issues with her situation and how she was treated in the community. I don’t know much about the details, but either way, she felt ostracized and alone, and she found a community that accepted her and went back to it. I can understand that. If you’re in need of support, and the community she turned her back on — the religious community — accepts you again, I can see how that can be appealing. Life is hard. If you don’t have support from your current community, I can see how she would be drawn back to the religious community again. I can see why religion is appealing to people. People want meaning in a meaningless universe. People want answers. That’s something I’m trying to do with my work, to show that we as a secular community can come together and provide that same sense of community and support that people get through religion.

KD:  That was a very political answer and you spun the shit out of that question. [Laughing] So I’m going to ask you again, since you didn’t quite give me the answer I’m looking for. Do you regret having her in the book?

CJ:  [Laughing] I did, didn’t I? Ok, well obviously if I was doing the book now, I wouldn’t include her since she’s not an atheist. Do I regret it? Knowing what I know now, it’s definitely a wrinkle in the project that she’s in it. But actually, I could see some value in reading her words from when she was an atheist, despite the fact she’s not an atheist now. Does it really make a difference? If the words that she wrote and the stories she told when I interviewed her… if that’s still a compelling story, does it matter if she’s religious now or not? Probably not actually.

KD:  I can see what you’re saying about that. Probably most of the people who read the book don’t know who she is. She had a brief stint in the positions she held in the secular community and did talks at conferences, but a lot of people who aren’t active in the secular movement won’t know who she is or that she’s not an atheist anymore, and will still find value in what she said in the book.

KD:  It is, and it could happen again. And no, I’m not making an announcement. [Laughing]  Chris, thanks for sitting down with me and giving us a little more insight into who you are, what A Better Life is all about, and what you’ve learned on your journey.  I wish you the best of luck and hope to run into you again soon!

If you’d like to listen to the full-length (much more entertaining) audio version of this interview, it’s available to Patreon subscribers here!

If you’re interested in bringing Chris to your local city for a screening, or would like to see what cities he has scheduled, check out http://theatheistbook.com/tour for more information.

Haven’t seen the film yet? Here’s the trailer. Go here to watch the full-length film online.

The Buzz Behind #NormalizeAtheism: A Conversation with Mark Nebo

2 thoughts on “Atheist Doc ‘A Better Life’ Has Screened in 100 Cities: Lessons from the Road [Interview]”