After an 85-year old Catholic priest was killed last week by Islamic extremists in France, Muslims and Christians are gathering together in that country in demonstrations of solidarity. They are attending each other’s worship services, and offering prayers on behalf of the other. This is an admirable attempt to show that people of different faiths can come together and see each other as equal human beings. But, ultimately, I think this is a perfect example of people missing the point — religion was the cause of tragedy in the first place. 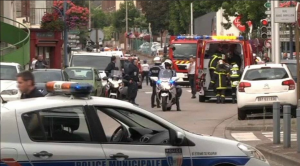 Every time an act of religiously-motivated violence occurs, those who are themselves religious are quick to claim that religion had little, if anything, to do with it. They blame “mental illness” and “political motivations” and a plethora of other reasons, anything to keep religion out of it. They don’t want religion to be the culprit because if it is, they will have admitted that religion can be, and is, a force for evil in the world. And once you’ve done that, things start to get messy — suddenly you are subscribing to an ideology that, while used for good much of the time, can be used in very bad ways. And no one wants that; so it’s much easier (safer) to blame something, anything but religion for the problems in the world.

So what happens after a religiously-motivated tragedy? The religious gather to comfort one-another, assuring themselves that their religion had nothing to do with what happened. They condemn the violence and tell the rest of us that religion is not to blame. They promise that healing, reconciliation, and unity will come from the true practice of their particular religion. But who gets to say what the “true practice” of a religion is? Who appointed XYZ religious apologist the gatekeeper and definer of the faith? What gives one person the right to tell another who is practicing/representing the faith accurately? Is there really a “true” or “pure” version of any religion? Or, as David Silverman says, is all religion cafeteria religion? Doesn’t each religious person make it up as they go, picking and choosing which parts they want to apply to their lives?

Religion is not going to solve the problems we see in our world today, and it is most certainly not going to fix religiously-motivated violence. You can’t fix the problem with the problem. Appealing to a higher power, transcendent moral code, or divine law-giver, is not going to make things better; it is the very thing that is making things worse! So when the next religiously-motivated tragedy occurs, we must not let religious people shift the burden somewhere else. We must shine the brightest light we can find directly onto the source. We must not willingly miss the point — religion is the problem.

View all posts by Matt Young →

Attention Secular Groups: This Atheist Wants to Report You

6 thoughts on “Missing The Point — Religion is the Problem”