Recently, I posted on Facebook and on a blogger job board looking for guest contributors, as I do from time to time. I like to bring in perspectives or personal stories from new writers to mix things up. Besides, this is SecularVoices, not The Secular Voice of Kevin Davis. So look forward to a few new contributors starting soon!

Today I received a response from Benjamin Roussey, a Christian who, in all his typical loving Christian ways, thought it would be a good idea to email me and tell me what he thought about atheism. Unsurprisingly, it was one of your typical “atheists are idiots” messages that come in by the dozens. This, however, was the first one I received on a job board. Because of this, it didn’t carry along with it the cover of Twitter or Reddit anonymity. It was accompanied by a full name, photo, and email address. This wasn’t a drive-by “atheists are going to hell” message. It was sent by someone who registered at a blogger job board and was looking for employment. So like any considerate prospective employer, I responded. Here’s the exchange, for your amusement. 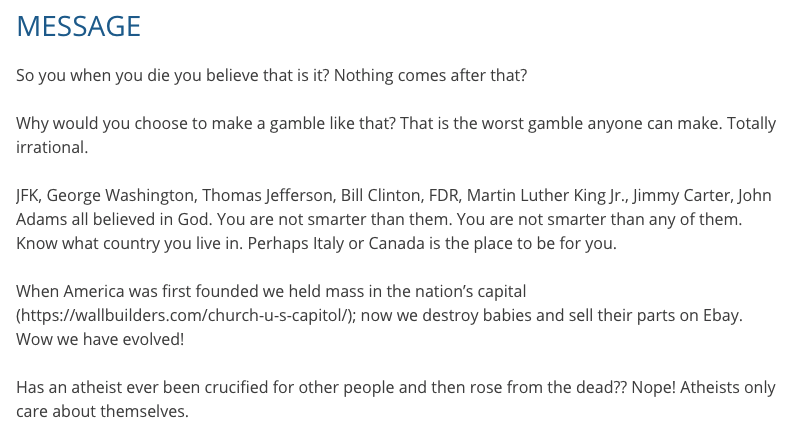 Here’s the response I just sent to Benny boy:

Thank you for your message. Your willingness to consider the viewpoints of people unlike yourself is refreshing. Oops, sorry. I think I misspoke. What I meant to say was that your lack of ability to fathom anyone not believing what you were programmed to believe is pretty commonplace in the Christian community. You’re a dime a dozen.

While I realize you disagree with the concept of atheism, I’m afraid that based on your ignorant tirade about it, you don’t at all understand it.

Atheism is not a gamble. Atheism is a conclusion based on evaluation of evidence (or lack thereof). Subscribing to one religion or believing in one of the over 2,000 gods that have been worshipped throughout human history is indeed the gamble. Would you take a bet in a casino with 2000:1 odds? I think not. Yet, you’re wasting your time and mine by sending this nonsense to me and judging a person you’ve never met, calling me irrational, when in fact, I’m the one who’s made a rational conclusion based on facts, not mystical tales written by desert dwellers who didn’t know where the sun went at night. You know all those gods you don’t believe in? All 2,000+ of them? I just go one god further than you. I walk right by the casino and live my life, not wasting time on foolish pursuits.

Thank you for the information regarding what historical figures believed in a deity. I’m sorry to hear you’re unable to think for yourself and feel your belief system is validated just because historical figures subscribed. I could also give you a list of very intelligent and successful people who are atheists. Will you then tell me you’re smarter than them? Do you see the irrelevance of your claim yet? It’s called the Appeal to Authority Fallacy. I’d go so far as to say that, based on your complete lack of internet privacy measures and how easy it was to find your company, home address and phone number, most people on the internet are smarter than you, let alone prominent atheists. I guess that University of Phoenix education isn’t working out for you very well.

Thank you for the history lesson on mass held in the nation’s capitol. (It’s spelled with an -ol by the way. Being such an accomplished writer, I figured you’d know that, but it looks like I was wrong.) Yes, it’s true there were services held in the capitol in the 1800s. We also had legalized slavery in the 1800s. Is that still ok too? No, both would be considered bad ideas by today’s standards. So just because something was acceptable then, doesn’t mean it was right. And you might want to start using better sources than Wallbuilders, founded by David Barton, a disgraced “historian” who actually writes books and gives speeches based on his personal version of revisionist history. He’s been debunked so many times that even his publisher dropped him and pulled his book off the shelves. https://www.patheos.com/blogs/secularvoices/2012/08/24/david-bartons-book-pulled-for-falsifying-us-history-to-fit-evangelical-agenda/

If you’re subscribing to the revisionism that David Barton shovels, that’s just further evidence of your own lack of rational, critical thinking. Yet you said I’m the irrational one.

You advised me to know what country I live in. I certainly do. I live in the United States of America, a nation that was founded on the principle of individual freedoms. Because of this, I have the right to speak publicly without the fear of governmental retribution. I also have the right to worship however I want, or not at all, and the government cannot tell me otherwise. I think you’re suggesting I move out of the US because people like the disgraced David Barton have told you the US is a “Christian nation.” That’s blatantly false. While the US is primarily a nation of Christians, it is not a Christian nation. It is a secular constitutional federal republic. There is no mention of adherence to a particular religion in any of our founding documents or current laws. There is, however, the Establishment Clause of the First Amendment to the Constitution that says exactly the opposite. Picking up a history book written by actual historians might do you some good.

You asked me if an atheist was ever crucified and rose from the dead. My answer is no. I’ll expand on that. No one has ever been crucified and rose from the dead, despite the mention of it in your holy book, as well as in other, older religions. Did you know that resurrections occur in many religions that predate Christianity, and that it’s possible Christianity borrowed that concept? Probably not, because you’re a brainwashed short-sighted idiot who doesn’t realize there are people living completely joyful, fulfilling lives outside his Christian bubble.

Finally, if anyone is selling baby parts on eBay, please notify the authorities and eBay. I’m certain that type of auction is prohibited on the site and has actually never happened. But you go on believing more fantasies if you wish. That’s your prerogative. I certainly won’t push my beliefs on you or ask you to reconsider your delusion. See how that works?

I wrote a book that helps people like yourself understand the reasons people become atheists (because I care about more than just myself), and I’d offer it to you for free if I thought you’d actually read it. But since you decided to email me your unsolicited and wholly ignorant opinions about atheism, I can tell you have no interest in acceptance, understanding or building bridges. So go f— yourself. (Edited for Patheos advertisers.)

This letter will be published on my site today. Enjoy!

UPDATE: Since sending my response, I have received 9 direct emails from this lunatic, all with psychotic religious rambling, most of which was only in the SUBJECT LINE. Who does this? This is a person who calls himself a writer. 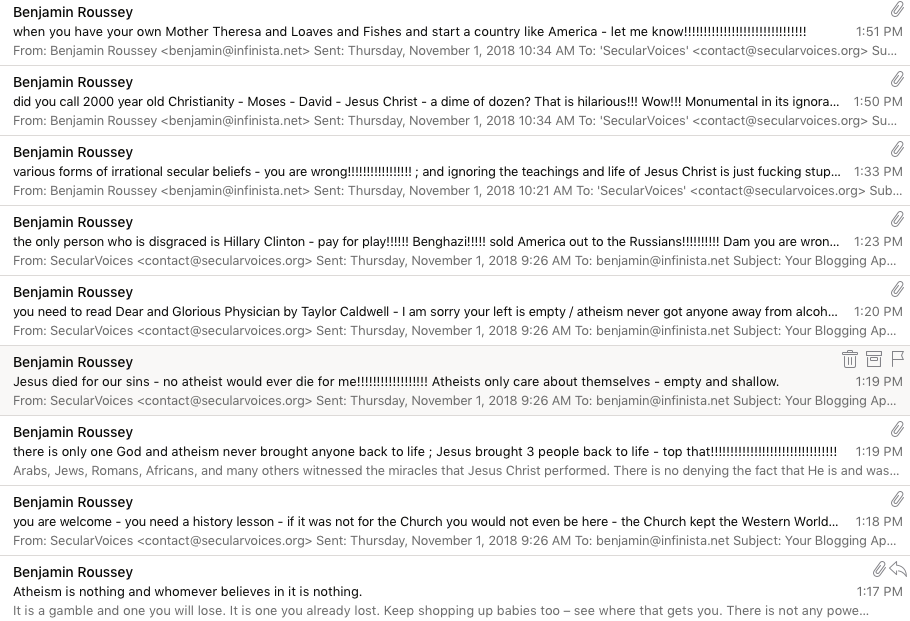 Tired of the Spin? Check Out These Brilliant ‘Translated’ Twitter Accounts

Donald Trump Thinks Due Process Is a Bad Idea

31 thoughts on “Mailbag: A Christian Responded to a Call for Guest Writers. I Replied.”