I knew this topic would come up eventually. I just didn’t realize it would be so soon.  A few days ago, I was playing with my son in the backyard, throwing a hula hoop high into the air and spinning it so it bounces back to us after it lands.

“Daddy throw it higher!” Of course, I obliged.

“Wow, it’s going up to heaven!” The sound of a needle scratching across a vinyl record fills my head (google it, millennials).  Full stop. 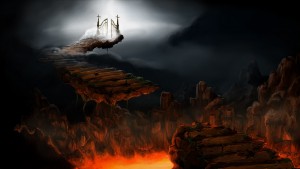 “It’s where you go and see God after you die.” Uh oh. I’m so not prepared for this. I always told myself I’d be prepared, or read a bunch of books to get ready for this moment. What great intentions I had. The moment has come, and I’m not going to ignore it. I won’t nod and smile and move on. This is important. I need to address this by asking the right questions — not necessarily by giving the right answers.  When I was six (and younger), the answers were given to me, just as they were given to the vast majority of people reading this story.  In my opinion, not only were those answers wrong, but they were someone else’s answers.  My kids will answer these questions themselves. It’s not my role to determine what my children’s belief systems will be.  It’s my role to give them the tools to be thoughtful and thorough when it comes to examining life’s unanswered questions.  Here we go.

First I want to know where this information originated. “Ryan, who told you that you go to heaven when you die?” [Source changed for anonymity.] “Johnny did. He says when we die we go to heaven to meet God.” Johnny is Ryan’s older cousin and comes from a church-attending household. I was already about 80% sure Johnny was going to be the source.

I asked a few more questions related to date and place, but I was really just stalling while my thoughts were circling, searching for the best words to use in this scenario. Finally, I chose to give Ryan a little background to help him understand what Johnny was telling him, and then follow up by reinforcing that it’s ok to not have the answers.

I told Ryan that Johnny was just telling him what Johnny and Johnny’s family believe. I told him that people around the world believe a lot of different things about what happens after we die. Some people believe we go to heaven like Johnny said. Some people believe other things happen, and some people, like your mom and dad, believe that when we die, we just die like any other plant or animal, and nothing happens. We’re dead and the world goes on without us. He seemed to understand what I was saying, but he’s six, so who really knows. He might have been “yessing” me to get back to the hula hoop.

I let it go after that but decided to revisit the topic when we had some quiet time alone. That night, it was my turn to get Ryan ready for bed and read him his story. We went through the normal routine: teeth, pajamas, story, and bed.  But before I kissed him goodnight, I told him I wanted to have an important talk about what we were chatting about in the backyard.

I started by verifying that he understood what I was talking about earlier. Then I went a little bit further. We had a quick talk about what “proof” is, and I told him that no one really has any proof of anything that happens when they die, because after you die, you can’t come back and tell everyone what happens. So people have different ideas of what they think happens and believe different things. At this point, I felt like I was getting a little too “indoctrin-y” and made sure I didn’t show too much favoritism for one viewpoint over another. I’m sure he and his brother will pick up on little things we say about religion and the religious, but the last thing I want to do is tell him what he should or shouldn’t believe. So I shifted a bit and told Ryan that he and his brother will be able to decide what they believe when they’re older and are able to learn more about all of the beliefs.  He seemed ok with that, so I finished our talk by telling him that mommy and daddy are here for him if he has any questions about this stuff and that he can ask us anything he wants whenever he wants. He smiled and nodded, we said goodnight, and he went to sleep.

It’s been on my mind since and will be for a while, so I’ve already ordered a couple highly-rated children’s books that deal with this topic. I think that will help a bit, but in my opinion, keeping this conversation channel about beliefs open is probably the best way to help Ryan (and eventually Grayson) navigate through the countless times they’ll encounter conversations about religion.  After all, they’re members of predominantly Christian families and live in a small rural/suburban conservative Christian town called Churchville. I mean, come on.  Not to mention, Ryan will be entering first grade this year in our public school district that hosts a Good News Club. So religion will be there.  And so will we, to keep the indoctrinators away and help them think critically about the claims of others.

As I finish writing this story, Ryan and I are sitting on the porch while he eats lunch. He must have glanced at my screen and saw the word “God” somewhere, because out of the blue, he looked up from the plum he was enjoying and said to me, “Hey Dad, remember when we were talking about God?”

“Can I ask another question?”

“Of course you can.”

I sat and thought for a minute and smiled. I said back to Ryan, “Well, no one really knows for sure. Some people believe that God is real and some people don’t.”  I knew what his next question would be. “Do you believe God is real?”

I asked him one more question and his answer put everything back into perspective. “Ryan, do you already believe something?” He thought for a couple seconds.

“I believe plums are good. And that my daddy is nice. And flowers are beautiful.”

What has been your experience the first time the “God question” came up with your kids? How did you/would you handle it? I’d love to hear your experiences in the comments.

28 thoughts on “Now What: My 6-Year-Old Told Me You Go to Heaven When You Die”