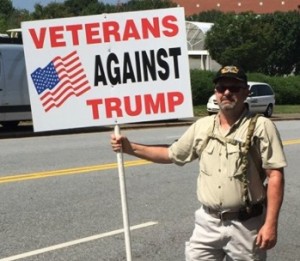 Bronze Star and Combat Action Badge recipient Steven Hewett is an award-winning atheist activist and Afghanistan war veteran.  Ever since his return from service, Hewett has been instrumental in removing religious symbols from public spaces in his hometown of King, North Carolina, an effort that has been met with years of local resistance and ostracism by his community.  Along with his secular activism, Hewett is also a Hillary Clinton supporter and anti-Trump protestor.  On multiple occasions, he has been seen holding a “Veterans Against Trump” sign in public, informing his community that a Trump presidency isn’t as supported by the military as the Donald would have you believe.

On Election Day, Hewett was holding his sign outside his local American Legion when a vehicle containing two military veterans, apparently purposely ran into him and drove off.  Since Steven knows that anything he does in his town is met with vitriol and conflict, he had the cameras rolling during the incident.  Here’s what he captured:

The deplorables have struck again. Let’s hope this person is identified and arrested.

UPDATE: The driver has been identified and charges are pending.  He may want to think about contacting Mr. Trump to cover his legal fees.