David G. McAfee is an author and educator.  After graduating from the University of California Santa Barbara with degrees in English and Religious studies, he began writing about secular and atheist issues. But recently, he has collaborated with illustrator Chuck Harrison to produce a series of books for children.  I spoke with David recently about his books and what he’s working on next.

Matt Young (MY):  Your first two books were more “apologetic” in nature, and were geared towards an adult audience. Why did you decide to start writing books for children? 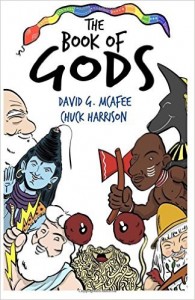 David G. McAfee (DM):  Disproving Christianity could be seen as an apologetic (or anti-apologetic) book, but Mom, Dad, I’m an Atheist was more of a self-help/reference work. I decided to write children’s books after I realized that kids in the United States and around the world weren’t getting adequate religious studies education. I wrote The Belief Book first – to help give children of all ages an idea of what beliefs are and why they are important – and then moved on to The Book of Gods. That one is my most recent book and it teaches kids all about deities and their origins and stories.

MY:  It does seem to be the case that children (in the U.S.) lack a robust education in religion. Do you have any thoughts on why that is?

DM: Some countries, including big chunks of Europe, provide compulsory religious education in the public school system. These classes are meant to provide objective facts about religions and their histories and, when executed properly, they do just that. The result in those regions is less dogmatic fundamentalism and fewer religious adherents in general. In the United States, we don’t often adopt this method. Instead, we keep religion out of schools almost entirely and leave it up to families to teach their children about that topic. The problem there, of course, is that most of these families are biased and uninformed when it comes to faith. They raise children who are ignorant of the facts and therefore more likely to adhere to fundamentalist interpretations. They need to understand that all religions are on the same footing and that they are merely cultural creations, and that’s something I talk about in The Belief Book and The Book of Gods.

MY: The United States does seem to enjoy being unique in its approach to education about religion (for better or worse). There seems to be an interesting disconnect between the importance most religious people place on their beliefs, and their level of education about those beliefs. For instance, most American Christians could probably tell you very little about other kinds of religious beliefs, yet they are so sure their personal beliefs are correct. I think you have hit the nail on the head by pointing to the curriculum in the education system. If we leave the educating of our children to people who are not learned on the subject, what else would we expect than for our children to be ignorant of the facts and perpetuate the cycle of religious tribalism. This leads to something you talk about in The Belief Book — the importance of asking questions about everything. Growing up in a fundamentalist Christian home, I personally experienced the squelching of natural curiosity and question-asking that every growing mind is filled with. Now, as a (secular) father, I want to encourage and help my kids to ask questions. But then you move on to talk about how the kinds of answers we create — the “stories” we tell — in response to the questions we ask are important because what we believe affects how we live in the world. As an atheist, you have answered some of the important questions in a certain way. Should parents be worried that this book is trying to force your personal answers on their kids?

DM:  It’s a natural concern. Parents have the tendency, and the right, to question whether any particular piece of literature is going to push beliefs on their children or otherwise negatively impact them.  But a quick look at The Belief Book and The Book of Gods would reveal that’s the opposite of what Chuck and I do. We encourage kids of all ages to question the things around them and work to distinguish evidence-based beliefs from unjustified notions. There is never a time when we instruct people to believe certain things or indoctrinate people into atheism. In fact, The Belief Book doesn’t mention atheism at all! Basically, I tried to simplify what I learned as a Religious Studies major at UC Santa Barbara and convey it in a way that young kids can understand.

MY: Learning to distinguish fact from opinion is something many adults have a problem with; it makes one wonder if they could have benefited from these types of books when they were kids. As a father myself, I was excited to get ahold of your books, and I know my kids will enjoy them. I know there is a third book you are currently working on — what will that one be about?

DM: Yes! Chuck and I are currently working on the third book in the series all about specific religions and prophets and holy texts. The book will be called “The Book of Religions” and it will teach kids (and kids at heart) all about a number of ancient and modern religions. We wanted to start out with the basics in The Belief Book, add some context with The Book of Gods, and give the rest of the information in The Book of Religions. We are also considering a fourth, special book in the series. It would be all about science and different scientists throughout history!

MY: Thanks, David.  We’ll definitely look forward to that one as well.  On behalf of SecularVoices and the community, I applaud you for your commitment to education and wish you luck with your future projects.

You can find more from David on his personal website, here.

View all posts by Matt Young →

A Response to Jackson Wu’s Conclusion of What Causes Atheism

One thought on “Teaching Kids About Beliefs, Gods, and Religion: an Interview with David G. McAfee”