If you read about the Freedom From Religion Foundation’s (FFRF) latest warning to a Texas high school, you most likely thought nothing of it, since it seems pretty clear-cut. LaPoynor High School in Larue, Texas, received a letter from FFRF demanding they take down the Christian flag that the school has been flying alongside the Texas and US flags on school grounds. The flag was apparently raised as part of the annual See You at the Pole event, a national student-led (at least it’s supposed to be) event where kids pray together at the school’s flagpole. We see these types of complaints all the time, especially in Southern states, where they wear their Christianity on their chests and think the Founding Fathers all had Bibles in their back pockets. I guess that’s what happens when you change all the history textbooks in an effort to rewrite the formation of the US as some kind of Christian homeland.

After the school district shared the complaint with the local community, the “persecuted” Christians began coming out of the woodwork, arranging protests, speaking out, and asking the school district to fight back. Three students at the school even strapped Christian flags to their pickup trucks (because, duh) and parked them in the school parking lot in an effort to stand up to the rotten atheists at FFRF.

Over the weekend, Master of Ignorance, Todd Starnes, wrote about the event like it was some kind of holy war victory. In his article, he showed a photo of the three trucks parked in a line with their flags on the back. Here’s how he described it:

…students at the high school have taken matters into their own hands — they’ve decided to stand up to the atheists. Several youngsters purchased Christian flags and mounted the banners on their pickup trucks. It was quite a scene in the high school parking lot — a convoy of trucks adorned with the Christian flag — waving in the Texas breeze.

Wait, what? Three. Three students bought flags and attached them to their trucks. Not “several” and certainly not a “convoy.” What a dishonest moron Todd Starnes is.

“But Kevin, just because there are only three in the photo doesn’t mean there weren’t more you don’t see here.”

Nope, there were three. If there were more, they’d be in the photo to show solidarity. Also, this: 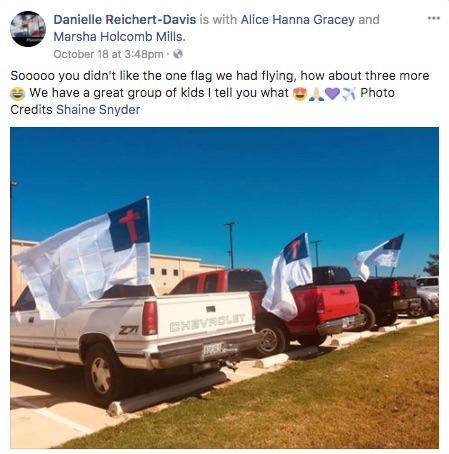 But aside from Starnes’s habitually disingenuous reporting, atheists and others who support the separation of church and state don’t give a damn what you attach to your personal vehicle. Through the years, Christians have conflated church-state separation with anti-Christian policymaking. That’s just not the case. Separation advocates just want equal treatment. Either everyone gets a seat at the table in the public square or no one does. That’s it. If the government flies the flag of one religion, they have to fly them all or don’t fly any. It’s not about hating religion or being anti-Christian. It’s about the law and equal treatment.

So kids, fly whatever flag you want on your trucks. No one cares. You have every right to display your belief in fairy tales on your own vehicle. You’re not making a statement by doing so, and you’re not standing up to atheists. It does make your truck look pretty stupid though.

Watch Two Pastors God-splain Through the ‘Good Without God’ Debate