Unless you turned a blind eye to all social media and news outlets over the holidays, you might have noticed headlines about Mark Zuckerberg denying his atheism.  On Christmas Day, he posted the following on Facebook. Note the first comment and Zuck’s response: 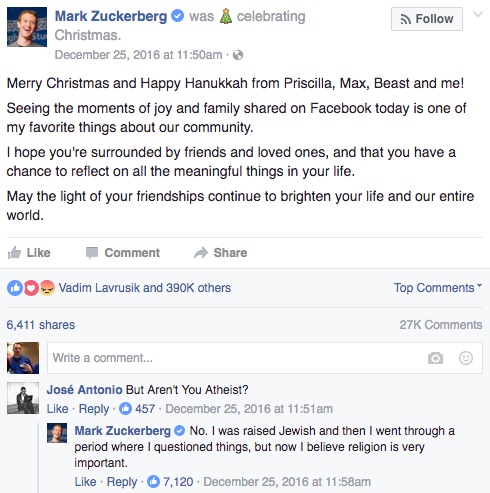 Widespread speculation on the interwebs suggested that Zuck’s change of heart is likely due to his daughter’s arrival in late 2015 and the religious customs that coincide with childhood and early development.  But now there’s another theory floating around.

Yesterday, Zuckerberg posted that he plans to visit every state by the end of 2017, spending time speaking to people in each state.  Since political involvement is not new to Mark, some are speculating that this move is a first step in launching a political career that will culminate in a run for office.

I, for one, would be quite interested in what a politician-Zuckerberg would have to say about what he thinks he could accomplish.  He’s a pro-science, pro-technology, young, intelligent, in-touch American who values philanthropy.  Aside from being a billionaire political outsider (and quite possibly now a closeted atheist), Mark Zuckerberg could be the total polar opposite of Donald Trump, something America may be very ready for in a year or two.

So now that he’s shed his atheism skin, Zuckerberg will be that much more palatable to the broader segment of American voters who think that not believing in magic is some kind of a barrier to office.

21 thoughts on “The Likely Reason Why Zuckerberg Denounced His Atheism — HINT: It’s Not His Daughter”