According to Yahoo!, the two are students at the Ethical Culture Fieldston School in New York City. The school hosts an annual fashion show, and requires entrants to create their clothing using nontraditional materials. The girls decide they wanted to make a statement with their entries this year, inspired by the current political climate.

One of the girls, showing wisdom beyond her years stated:

“When I walked down the runway, I think some people thought it was funny that I was wearing condoms on the top, but I think it was a great way to bring people out of their comfort zones a little bit, and de-stigmatize something that shouldn’t carry any stigma at all.”

I wholeheartedly agree. American culture is flooded with images of weapons and violence, especially in the “God and Guns” evangelical community, but when anyone makes reference to sex or nudity, our puritanical senses begin to tingle, causing all sorts of discomfort. It should be the other way around.  I’m fairly certain Jesus didn’t carry around an AR-15, but he sure as hell washed the feet of prostitutes (if you believe the Bible, that is).

Here’s what our buddy Ken Ham had to say about it: 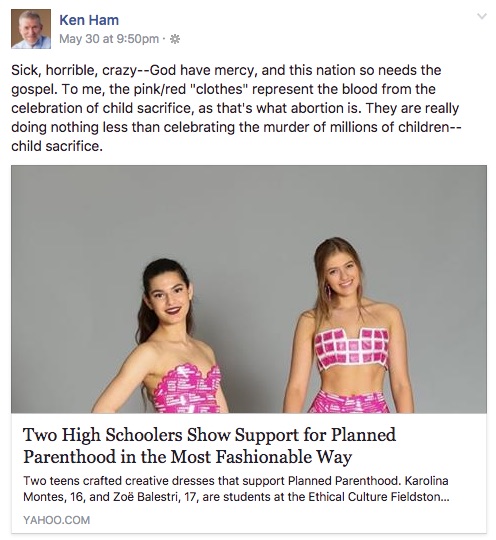 Wait, what? Pink and red clothes signify the blood of child sacrifice? Come on, Ken. You’re really becoming just a caricature of yourself at this point. And which child sacrifice are you referring to? The one where God sacrificed his son — who was also himself — to himself to save everyone else from himself (which makes no goddamn sense anyway)? Or are we talking about the references to God’s reverence for child sacrifice in the Bible?

I know, I know, Kreation Kenny is talking about abortion. Apparently, he still thinks that’s all Planned Parenthood does.  News flash though… Evangelical Christians visit Planned Parenthood all the time for low-cost or free health care and family planning services!  Oops.  I’m sure if he came across that information, he’d try to Ken-splain his way out of that one too… like that those people were possessed by the devil some other nonsense.

In the end though, I give these two young ladies a lot of credit.  First, for making a stand for what they believe in, and second, for making what appears to be some really nice-looking detailed gowns from not much more than pamphlets, stickers, and condoms!  That’s some talent.

And make sure you stop by Ken Ham’s Facebook post if you’d like to get lost in idiotic commenter hell and have nothing better to do but lose your mind. (Of course, I’d much rather you comment here instead!)

Another School Promotes Good News Club and Hides from Criticism