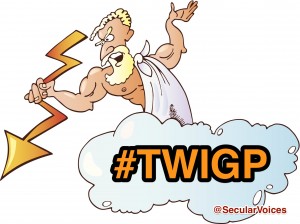 Welcome to the second weekly installment of SecularVoices’ new feature, This Week in God’s Plan. If you missed it last week, here’s what this is all about:

This Week in God’s Plan (#TWIGP), will highlight (or lowlight) some of the events that happened over the past week that no self-respecting benevolent deity could ever insert into its plan for the world or its inhabitants.  One of my pet peeves of the religious is how they explain so many things — successes and tragedies — as part of God’s plan.  Got cancer? God’s plan. Had a miscarriage? God’s plan.  Baby born prematurely? God’s plan.  I call bullshit.

This is just a sample of God’s plan for his precious children this week.  Tune in next week for more updates and examples of God’s love and protection.

Hate mail can be sent to contact@secularvoices.org.  Thanks for stopping by!